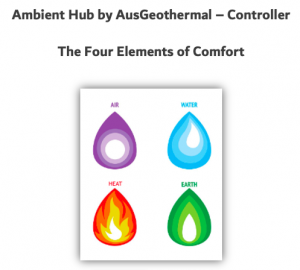 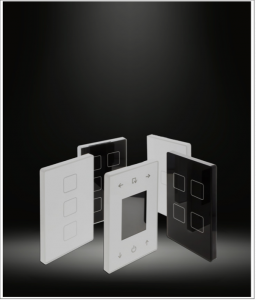 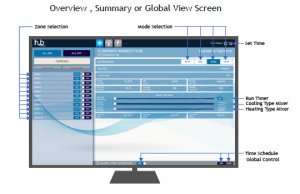 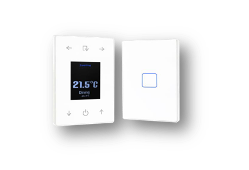 The Ambient Hub series is an electronic comfort control system that modulates the flow of conditioned water to heat exchangers and the flow of conditioned air to diffusers. Ambient Hub supports up to twelve thermal zones, includes a range of field level user interface options, supports connectivity for phones, tablets and personal computers and is connected to the cloud for remote diagnostics and control. The system combines energy efficiencies of hydronic and VAV technology to deliver the most advanced climate control package available in today’s market. The Ambient Hub series has been specifically designed for the large number of Australian’s living close to the ocean. Full stainless-steel body and tough corrosion resistant heat exchangers ensure that the Ambient Hub will last in the harshest environment.

Control up to twelve VAV, FCU, panel or underfloor zones

Local Area Network connectivity for connection of all smart devices

The AmbientHub series is ideally suited for any structure with dynamic heat loads, particularly those where a constant temperature is required across different areas. The conditioned space is divided into individual load segments (zones). Temperature sensors located in each area send data to the Ambient Hub control system which monitors the status of each load segment and modulates the capacity of the VAV dampers, Water valves or fan speeds to match the total load (heating or cooling requirement).

The operation can best be explained by separating it into the following areas: 1. Energy source capacity modulation 2. Hydronic modulation 3. Airflow modulation Capacity modulation in a heating and cooling system refers to varying capacity output deliberately to better match the cooling/heating load on the system. Ambient Hub is designed for use with AusGeothermal Ambient series variable speed ground or air source heat pumps. To truly understand the benefits of capacity modulation, first consider the behaviour of non-modulated systems. Such systems do have a degree of capacity variance as load varies, but in an undesirable manner. Consider the cooling case in Figure 3. A traditional AC system has a capacity output equivalent to the cooling load at point A. This is the optimum capacity for these load conditions. 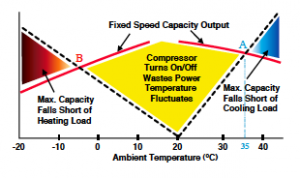 If the ambient (outdoor) temperature rises above 35 °C (move right from point A), the cooling load increases (indicated by the black dotted line), but the AC’s capacity actually decreases (indicated by the red line). The result is a shortfall in capacity. If the ambient temperature falls below 35 °C, the cooling load falls as well but the AC’s capacity actually increases, as shown in Figure 1 moving left from point A. The resulting surplus capacity is wasted in this instance. The same undesirable capacity changes are in effect when considering the heating case. Figure 4 clearly shows the effect of excess capacity on comfort levels. As the compressor cycles inefficiently in an attempt at modulation, the temperature fluctuates. 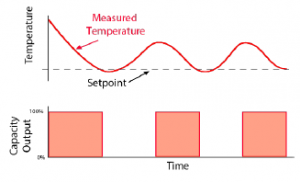 By modulating the capacity equal to the load variation, within the design parameters, the AC capacity is always optimised. See Figure 5. 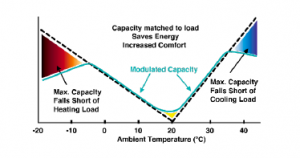 As is evident in Figure 6, optimising capacity results in more consistent temperature outcomes and greater efficiency. 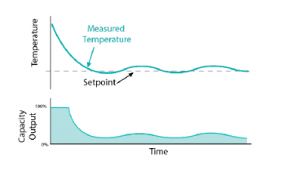 In reality, it is not possible to modulate the capacity to equal the load in all conditions, nor in infinitesimal amounts of time. By incorporating capacity modulation at both individual load segment level (VAV) and system level (VRAF), the capacity output can be highly optimised, and the system can respond quickly to load variations, limiting temperature fluctuations to approximately ±0.5 oC.

VAV capacity modulation applies a layer of control at the level of individual load segments by changing the position of the damper to control the volume of conditioned air being delivered to each area. Three variables influence the damper position for each load segment. Two of these are measured (room temperature and supply air temperature) and the third is set (target temperature or set-point). The damper to each load segment will remain in the closed position (or minimum ventilation position – if set) unless the supply air temperature is such that it will cause the room temperature to move towards the set-point. When this condition is satisfied the controller incrementally opens the damper over a 2 °C proportional band. The control system also includes a minimum ventilation function. This may be set from 0% to 30% and when activated the dampers to all active load segments are modulated between the minimum ventilation setting and fully open. The dampers to any load segment that is not active will remain fully closed. The influence of the VAV capacity modulation function on system pressure results in the requirement for a control strategy to maintain acceptable duct pressure and noise levels. This is accomplished by controlling the speed of the indoor fan to match the requirements of the conditioned space via the VAF management algorithm. The VAF management system modulates the speed of the indoor fan based on the condition of the VAV system as a whole. The position of the VAV damper to each load segment is monitored and at any given time the status of the VAV system can be expressed as a percentage open. Consider the following simple examples: Example 1 A system is made up of two load segments of equal size. The VAV damper to one segment is fully closed and the damper to the other is fully open. In this instance the VAV system status is the same regardless of which VAV damper is open. 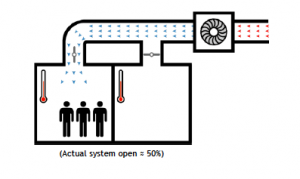 Example 2 Now consider the case where one of the load segments is larger (one is twice the size of the other). The status of the VAV system when the large load segment is fully open and the smaller one fully closed, 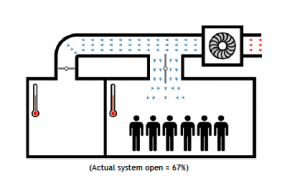 is obviously different from when the small load segment is fully open and the large one fully closed. 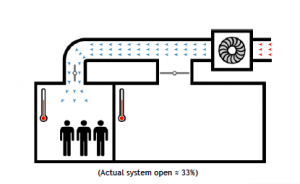 To ensure optimum operation of the airflow management algorithm for the case in example 2, each load segment is assigned a virtual setting called the airflow profile.

On all of our domestic heat pump parts and labour.